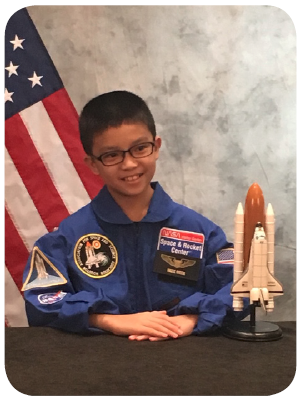 This summer I participated in the Space Camp with Eagle and it was super fun! I’ll tell you now. When I have my feet stepped on America, I only had one feeling in my heart. It was: I’ll start my Camp on my own now! We went to the Johnson Space Center in Houston. Inside we saw the team capsule hanging on the wall. It was very cool! We also saw the robot that was for helping the astronauts to do their work in space’s zero gravity. There was also the space shuttle’s model inside the museum! The coolest thing in the Space Center was the Apollo Program’s Mission Control Center! We saw all the old computers used for the missions.

Then was the Space and Rocket Center located in Huntsville. The first thing we saw when we walked into it was the 1:1 space shuttle model shown in the park outside. Then the teachers took us to the lodge to let us put down our luggage. Because it was morning, the next thing we did was go to eat our breakfast. It was like a buffet in the galley. You might think there was only us inside, right? But, inside there were already some people inside. They also had a two-week space camp in America. The highest thing outside was not the shuttle model. It was the Saturn V Rocket Model. It was 1:1, so it’s super high. There was also another rocket model outside. That was the Saturn 1B Rocket. That’s not all. Beside the Saturn V, there was also a museum called the Davidson Center for Space Exploration. Inside was the REAL Saturn V rocket! Its length was about 145 meters long.

Then one day we made and launched our rocket! The center has their own rocket launch site, so every team makes a rocket to launch. On the launch day, everyone was excited to launch their rockets! Our team’s rocket went all the way up to the sky. Then it fell to the ground. Because it had an engine inside, when we went to pick it, the rocket smelled stinky.

But the most fun thing we did at the center was to have a task. I became the one at Mission Control! My work was to give astronauts commands. Inside the room we used some facilities to control the status of the spacecraft or the astronauts. We had some problems in the mission, but everyone worked together to fix the problem. Everyone participated hard on the mission!

We also experienced the feeling you’ll feel on the moon! Because the gravity is different from Earth, it’s hard to walk probably.

I have fun at the space camp, but if I didn’t come to learn at Eagle, I wouldn’t be able to talk with the teachers without a Chinese teacher! I also must thank my parents for paying the money to let me have a super fun experience this summer vacation!